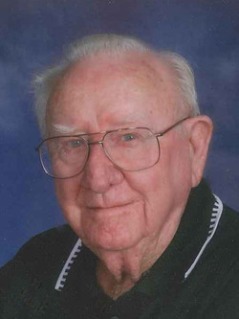 He was born to Pioneer parents. His mother made the land run opening Oklahoma to settlement, She was aged 6 at the time (1889) His father was a Sooner, as he had been in Indian Territory since 1875. He was born late in their Lives. His dad was 64 and mom was 40 when he was born on January 8, 1923 in Hominy, OK. He had 12 brothers and sisters.

During WW2 he enlisted in the Navy and following a combat tour in B-24s, was sent to Minneapolis, MN. for advanced Electronics school. There he met the love of his life. Because he had another tour of combat to make, she moved to Los Angeles where her brother lived; he was posted to San Diego Naval Air Station. They were married in 1946 just after he was discharged from the Navy. They were living in Oklahoma and he was employed running a Bar and Pool room. The recruiter for the USAF came by every day to visit him, and, as the Berlin Airlift had just begun, he joined the Air Force as a Tech Sgt ( E-6) and was soon on my way to Europe to fly the Air Lift.
His Sweetie and two babies (Barb and Nance) soon joined him in Frankfurt, Germany. When the Airlift ended, he was posted to Copenhagen Denmark flying as Radio Op for General Ralph Snavely, who was part of the Military Assistance Advisory Group. Daughter Jennifer was born in Denmark on a day when he was flying down to Germany. His next tour of duty was on a remote radar installation in the Aleutian Islands; while there his son Dan was born in MN. The family later joined him in Alaska. Throughout his career they enjoyed many great duty stations covering many years before retiring in 1974 in San Antonio.

He was preceded in death on Dec.3, 1998 by Elsie G. Harrison, (Sweetie) his wife of 54 years and three grandsons. He is survived by his children, Barbara Luthy, husband Richard of San Antonio; Nancy Saylor, life partner, James Jacobs of Austin; Jennifer Haggy and husband Roger of San Antonio; son Dan Harrison and Judy Thompson ,San Antonio and daughter Paula Coleman and husband Paul Coleman of Corpus Christi. In addition he had 15 grandchildren and 8 great- great grandchildren, as well as numerous nieces and nephews. Following the death of his wife, he enjoyed spending many years with his dear companion, Nell.

He was a 4th Degree Knight in the Knights of Columbus, and he enjoyed fishing, golf and reading.

This site uses Akismet to reduce spam. Learn how your comment data is processed.